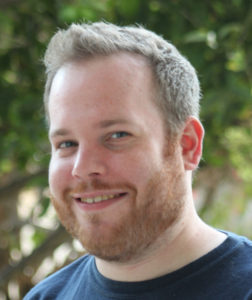 David’s books have been featured in The Hollywood Reporter, ComicBook.com, and io9, and have ranked on Barnes & Noble’s Best Comics and Graphic Novels list. His writing has been called “stunningly subversive” by IGN and “an absurdly good time” by Nerdist, while Syfy has described his work as “utterly insane or pure genius (or admittedly, maybe both).”

In addition to developing properties for comics, TV, and film, he has also worked for CBS, Netflix, and Universal Studios. Raised in St. Louis, David currently resides in sunny Los Angeles, where he lives with his understanding partner, their rambunctious terrier, and at least six deadlines.